Four of First Eastern Counties withdrawn triaxles were seen at the rear of Great Yarmouth's Caister Road Depot this afternoon. They were 30097, 30098. 30101 and 30105 which were respectively registered K481/2/5/9EUX. The first two examples were parked close to the Harley Road boundary enabling a photo to be taken. 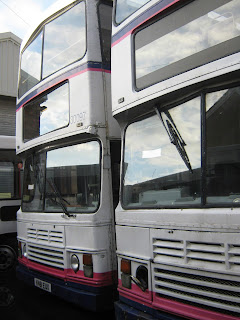 The latter appeared to be being used as a Christmas tree with its front lights missing plus the front registration plate being removed as well!
Keeping them company were at least three withdrawn Darts (from left to right) 47207 (M207VWW), 42441 (P441TCV) and 47233 (M233VWW) Thanks to Norfolkbus for the identity of the third vehicle 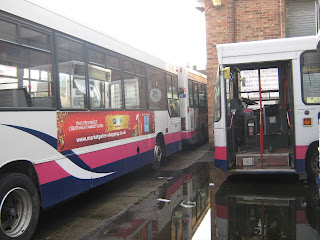