With Christmas almost a month away (oh no I hear you say!) a timely visit was made yesterday to the Lakeside Shopping Centre in Thurrock, Essex. 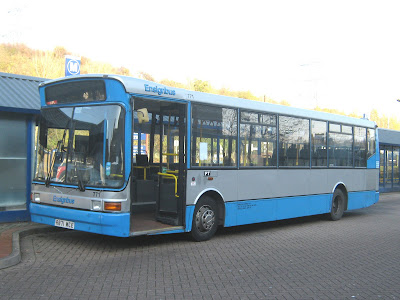 As well as the shopping, there was also an opportunity to view bus activity serving the centre. The principal operator is the family owned business of Ensign - also well known as one of the UK's largest used bus dealers. So having been given approval (!) to get out of the shopping, I made my way through Debenhams and out to the bus station. My first sighting there was Ensignbus Dart 771 (M871MCE) which was laying over between duties. 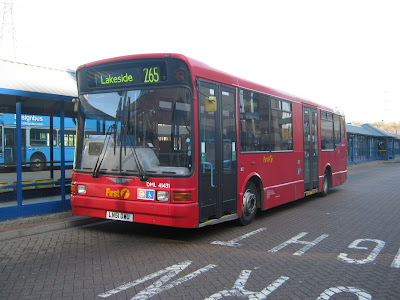 Also awaiting its next working was First London﻿ Dart DML41431 (LN51DWU) having arrived on the 265 route from Brentwood.

First Essex also had a presence with its Scania/Wright Solar 65666 (SN51UXY) the next to appear. Sister vehicles have recently transferred from First Essex to Norwich. 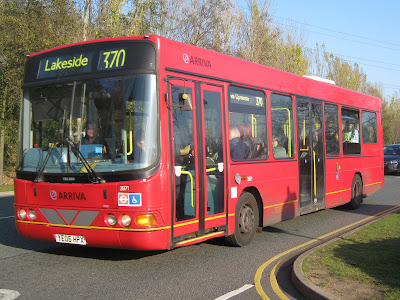 Arriva Southend's 3971 (YE06HPX) was then seen approaching the bus station nearing the end of its 370 journey from Romford. 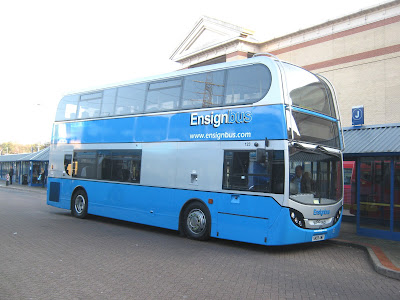 Former Alexander Dennis Trident demonstrator 123 (SN59AWV) was then noted on the stand at the bus station looking very smart in Ensign's silver and blue livery. 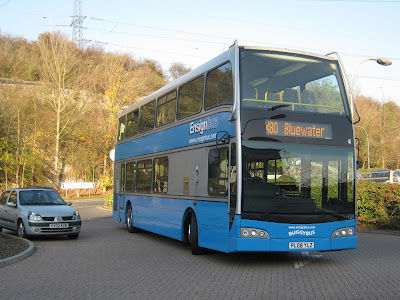 Further recent additions to the Ensign fleet include two former Sanders of Holt East Lancs Olympus bodied Volvo B9TLs. Above is one of them, 121 (PL08YLZ) is on the X80 service linking the Lakeside and Bluewater Shopping Centres. 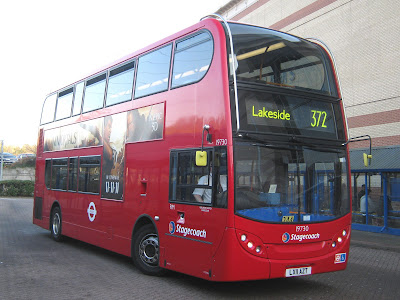 As I was about to return to the shopping centre, Stagecoach London's Alexander Dennis Trident 19730 (LX11AZT) arrived on the stand. I quickly tried to get a photo of it just as it was about to pull away; but I was too slow! However, the driver immediately stopped and manoeuvred his vehicle into position so that I was able to get a good picture of it! How unusual to get such a helpful driver, who then acknowledged my thanks before proceeding to his next duty.
Just over an hour then watching activities at Lakeside Bus Station which afforded some different vehicles in different liveries. Worthwhile escaping from the shopping!
Posted by eastnorfolkbus at 22:16