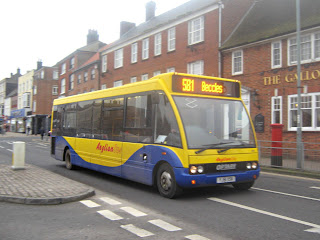 The first day of March coincided with a spare couple of hours on a grey and overcast day in Great Yarmouth Town Centre. During that time Anglian's Optare Solo 301 (YJ51XSK) passed me in the Market Place on a service from Beccles. 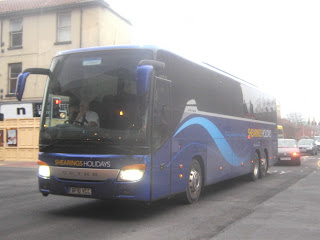 After some shopping I walked to the Market Gates Bus Station. It was there that Shearings Setra 212 (BF10VCC ) rolled past me on the through road thereby providing me with my weekly dose of the operator!. Luckily somebody was crossing the road at the time so it was going slow enough for me to get a reasonable photo. 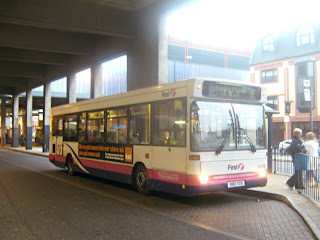 Later in the afternoon, as the light was fading, I finally managed to get a photo of First Eastern Counties newcomer Dart 46440 (N810VOD) which was working the 8's to the James Paget Hospital.  Originally expected to be transferred to Clacton from Ipswich, it found its way to Great Yarmouth instead! Rumour has it that it also turned up at Caister Road last year but was rejected.
Posted by eastnorfolkbus at 10:25