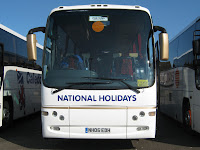 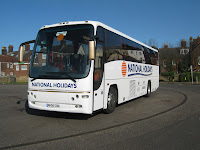 The milder sunny weather brought a number of coaches to the Beach Coach Station this afternoon with four National Holidays' vehicles present. They were 57 (NH05CDH) and 59 (NH05EDH) (both shown above) plus 63 (YJ03VML) and 88 (YJ03VOH). 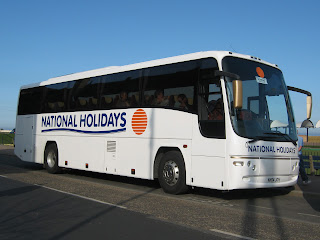 A further two were noted at North Drive pick up point near the Britannia Pier - 8 (NH04JCH) (see left) and 70 (YJ03VMX). So a total of six (!) of the fleet were present in the town and all of them with 'Pontins of Pakefield' stickers in the window - so clearly an excursion from the Suffolk  holiday centre.
Not to be outdone, two Shearings vehicles were also seen; 213 (BF10VCD) was returning its passengers to  the Carlton Hotel along Marine Parade whilst 513 (MX03ABV) was passing through Market Gates in the old livery.

All photos from the days sightings can be seen on my flickr site
Posted by eastnorfolkbus at 19:28