The local weekly newspaper, the Great Yarmouth Mercury, has three items of interest in this week's edition 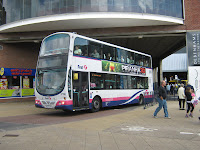 Market Gates Revamp
The first report is that the town's Market Gates bus station is to receive thousands of pounds of investment later this year. The money is to be spent on maps, electronic signs and improvements to its general appearance. The work has been prompted by the widespread dismay over current facilities available. 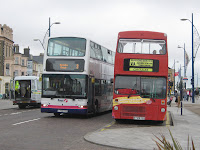 There are a number of responses on the letters pages of this week's paper regarding a report in the previous edition  that seasonal bus services were being curtailed or not going to be reintroduced this summer. ﻿﻿First Eastern Counties will only be operating the service 3 between Hemsby and Great Yarmouth's town centre and not continuing to the seafront. Additionally the open top 'sight seeing' service, previously operated by McMasters Awaydays, will not be provided either this year. The full press report can be found here
Bustitution

The local council's Head of Planning and Business, Peter Warner, has expressed his concerns over the replacement of two early morning rail services by buses. The trains are the 08:09 Norwich to Great Yarmouth and the 08:47 return. He continues that he "finds it difficult to understand that there appears to be no available rolling stock to operate the 'missing service'. Of equal concern is that the bus replacements offer no alternative to the queues on the (A47) Acle Straight to Great Yarmouth during the morning peak period."
Posted by eastnorfolkbus at 10:36