Friday was the first day of the three day North Norfolk Railway Steam Gala and, following many photos taken at the Gala, the camera was putting in some overtime by taking some bus photos in Sheringham and Cromer too! 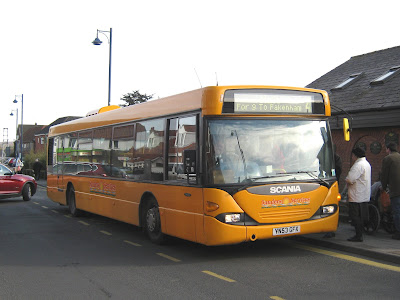 The first is of a Sanders Scania OmniCity 303 (YN53GFX) taking on passengers outside Sheringham's Tourist Information Centre on Station Approach.

New to Menzies of Heathrow in October 2003, it is one of many transferred to local bus independents. 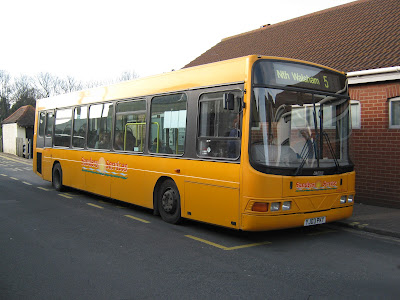 A couple of minutes later, on the opposite side of the road (outside the North Norfolk Railway Station) another Sanders vehicle was loading.

This time it was DAF/Wright Cadet 203 YJ03PKY performing on the 14:31 Holt to North Walsham service 5.

YK03PKY was new to Pullman of Swansea in South Wales. 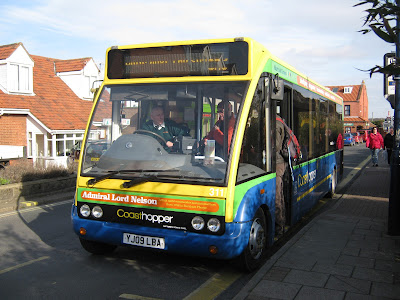 Returning to our previous location, on the opposite side of the road, Norfolk Green Solo 'Admiral Lord Nelson' arrived in Coasthopper colours.

In the guise of 311 (YJ09LBA) the Solo was operating the 14:45 Cromer to Wells-next-the-Sea Coasthopper ch3 route.

After obtaining some photos at Sheringham, it was time for the short drive of some four miles 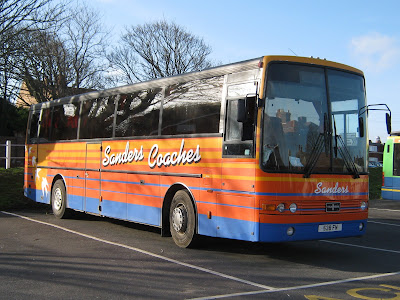 around the coast to Cromer.

My first port of call was Cadogan Road coach and car park. Here I found two local vehicles parked up.

One of them was Sanders DAF/Van Hool 538FN on contract duty awaiting the return of its passengers. 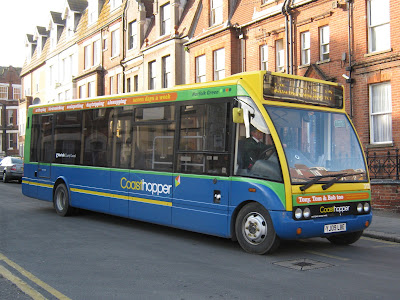 The other vehicle was Norfolk Green Solo 313 (YJ09LBE) laying over prior to working its next duty, the 15:45 ch3 Cromer to Wells-next-the-Sea.

The photo (right) shows her subsequently arriving at the bus stop in Cadogan Road about to take up that working. 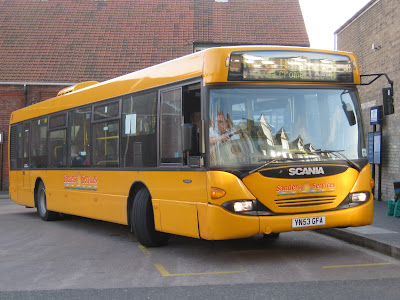 three Coasthopper drivers when the service first started back in 1996.

My final photo is that of another Sanders OmniCity, this time 308 (YN53GFA) is utilising the old Cadogan Road Bus station site on a North Walsham working.

It was interesting to see the two independents dominating the bus scene in the two North Norfolk towns with not a First bus to be seen anywhere!
Posted by eastnorfolkbus at 22:24