A day in Norwich yesterday with a trip into the city using one of Norse's Tridents from the Postwick Park and Ride. 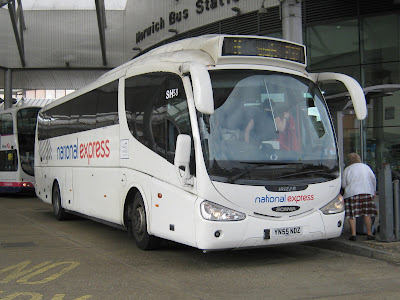 National Express Scania/Irizar SH58 (YN55NDZ) was there to greet us having arrived on the 06:50 727 service from Gatwick Airport.

Despite the long journey via Stansted Airport it arrived at the Bus station only 5 minutes down at 12:15.

Journey's end is just 'down the road' at the University of East Anglia. 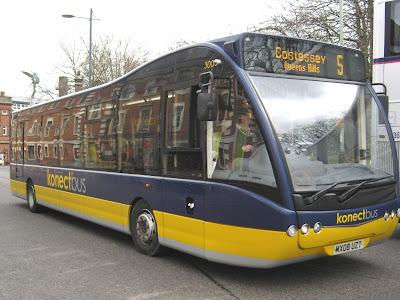 After a spot of lunch (and window shopping!) I headed to Castle Meadow to view the activity there.

For those that are not aware, Konectbus now forms part of the large Go Ahead group. 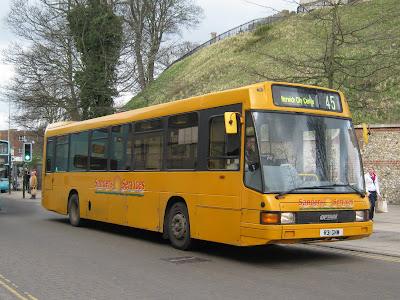 Continuing Friday's Sanders' theme, their DAF/Optare Delta 503 (R31GNW) ran through Castle Meadow with the Saturday only 12:20 from Holt. 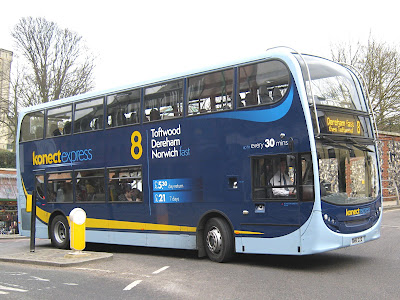 The vehicles are especially branded for the 8 Toftwood - Dereham - Norwich FAST service and were introduced from the beginning of this year.

Saturday was the first opportunity I have had to photograph any of them and the last of the five (609 (SN61CZZ)) duly obliged.

609 was heading westbound on the 13:30 from Norwich Riverside 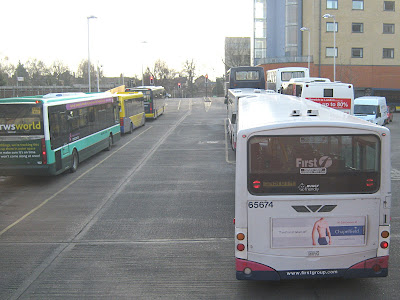 and is seen leaving Castle Meadow.

My last photo is from the top of one of Norse's Tridents leaving Norwich's Surrey Street Bus Station for the return journey to the Postwick Park and Ride site.

I was lucky in being able to grab the front seat and the view shows the variety of company vehicles present.

The left hand line up includes a Norfolk Green Tempo (103 YJ57YCC), an Anglianbus vehicle, with two from Konectbus forming the front of the two lines.

The end of the middle line (closest to the camera) is taken by First's Scania 65674 (SN51UYH), a former First Essex vehicle. Also discernible on the right hand side is a Norse Trident with a National Express vehicle tucked in behind.
Posted by eastnorfolkbus at 11:33