Since former First Volvo Olympian 34110 W437CWX was rescued for preservation in November last year, Colin Thorne has been busy and provides details about progress so far

'437 has been awaiting the refitting of her fuel pump so that she can move under her own power and get off the blocks the tow truck left her on. Well I was originally led to believe that only the fuel pump was missing......

It turned out there was a fair bit more than that missing! I ended up having to source some brand new injector pipes, a fuel filter housing and some other bits & pieces. Once all that was fitted, along with brand new batteries, it was found that the fuel pump was trying to push too much fuel through and she'd only attempt to run on brake cleaner.

The engineers I've employed to do the job did a bit of a research and concluded there was an electrical issue of some kind (the fuel pump is electronically controlled) - they had a diagnostic tool plugged in and found error codes on items such as the cruise control. Given that 437 is a bus with no such feature, it is suspected that the engine ECU (electronic control unit) is from a coach. Thankfully I had already sourced a spare engine ECU and when that was tried we had more success.

She's still in bits under the boot lid; the exhaust is disconnected, some of the rocker covers are off and she has two seperate fuel leaks, one on the primer pump and one around the fuel pump........but she is now moving under her own steam and is finally off those blocks. However, there's still work to do under the engine cover before that box can be ticked off the long list. 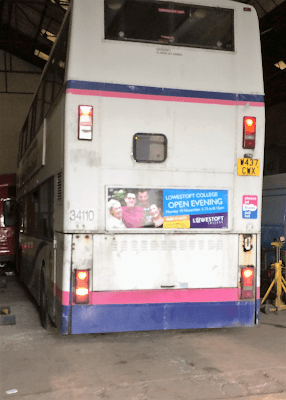 Given that she now moves, its finally been possible to get her up in the air inside the workshop and really get the full sense of whats going on with the chassis, etc. Whilst moving her inside there was a massive bang at the front - turns out the front nearside road spring (looks like a leaf spring) has snapped. So that's another job to add to the list.

Anyway, once up in the air it was found that the chassis will need welding in two places (possibly a third place as well but that depends whats left once its cleaned up), and two of the outriggers will also need work - one possibly requiring total replacement. Once the welding is completed the whole chassis will be cleaned up and painted to help protect it from further corrosion.

Both front brakes are near as damn it metal on metal so will need to be replaced and the nearside rear brake chamber is also knackered.

The main fuel tank needs its strap replacing but more importantly it is leaking fuel from a pipe that links it to the secondary fuel tank. The offside rear levelling valve has also snapped so she sits at angle when the air is built up.

So there's still a fair amount to do mechanically. On top of that, the top deck nearside window needs to come back out so that the replacement front dome can be fitted - in fact all of the windows both sides on both decks will need to come out at some point so that the body corrosion can be dealt with. To that end all of the pasenger seating has been removed (apart from a few that have been glued in with windscreen bonding!) and securely stored as leaving it all in situ with the windows out would have lead to it all being covered in dust. Much of it needed dumping anyway due to damp damage (don't forget I got a spare set out of sister 436 thanks to the generosity of First Eastern Counties).

Colin tells me has spent some £2,150 on parts and labour so far. The shopping list includes:-
He says 'the engine sounds really really sweet which is pleasing given that I bought her without hearing her run. That's pretty much where I am with it at the moment, and I'm financially commited to other things until August so we're back on hold until then........'

My thanks to Colin and Jamie Skinner for their help in compiling this post. Photos supplied by Colin Thorne

Roy
Posted by eastnorfolkbus at 18:31