After a week off, Throw Back Thursday returns with a look at Ipswich's Eastern Counties depot on 4th March 1995 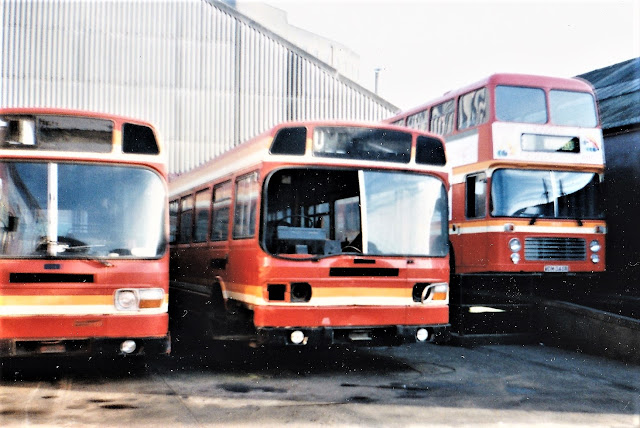 The photo shows the Foundation Street yard complete with two Leyland Nationals and a Bristol VR. The two 'Nationals' were LN567 and LN599 new in September 1976 and January 1978 as PVF367R and WVF599S respectively. Whilst they both look in a run down state they were being prepared for Greenway conversion which took place in 1995.

Following conversion, WVF599S was released back into traffic as NIL3691 and PVF367R followed two months later as NIL3952. They both received the LG prefix to their fleet numbers with the latter also receiving First livery prior to its disposal to Ben Jordan and it is assumed the other one ended up at the same place. (unless you know otherwise!)

As for WDM345R, it had a nomadic existence but was new to Crosville Motor Services as their DVL345 in May 1977. It moved on to Potteries Motor Traction in February 1990 where it stayed until December 1992. It then transferred to Eastern Counties later that month becoming VR183. It was finally withdrawn in November 1997 and moved to Ben Jordan during March of the following year. It had been broken up by early 2002.

My thanks to Rob Sly for his illustrated history of WDM345R.

Roy
Posted by eastnorfolkbus at 10:14