With another year coming to an end, we usually look back on the highlights of the previous twelve months. Unfortunately this year, due to the usual pre-Christmas madness, time constraints and attending to a serious health issue with a close relative, the blog is unable to bring the usual customary detailed annual review.

Highlights
However, the main talking point of this year has been the slow painful demise of Beccles-based Anglianbus; which many thought might happen but hoping that it wouldn't! Following yesterday's final run of the 61 route, the Go Ahead group subsidiaries now no longer serve our two towns. Their withdrawal from the Norwich - Great Yarmouth corridor also means that First Eastern Counties is now the sole operator along the A47.

During the year, First Great Yarmouth lost and gained some vehicles but the highlight during the summer months was that many of First Norwich's multi coloured buses were being pressed into service whilst here for their MOT. 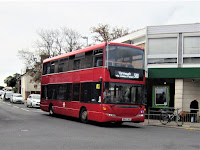 BorderBuses continue to go from strength to strength with the recent arrival of four ex Stagecoach London Scania Omnicities. On the negative side Great Yarmouth's Swift Taxis finally handed in their operator's licence during February this year.

With a number of buses rumoured to be arriving at First's Caister Road depot plus the impact of Norfolk County Council's proposals to cut bus subsidies from April 2018, next year could be another 'interesting' year. If you would like to support local bus services or provide a comment on the County Council's proposal you can do so via email at  HaveYourSay@norfolk.gov.uk before the 2nd January 2018.

The Blog
As East Norfolk Bus Blog nears its one and a half million page views (and achieves an all time monthly high of some 36,000 views in May) I would like to thank all of our readers for supporting the blog over the past seven years. My very special thanks goes to Grahame Bessey for his many tireless contributions and support - I don't know how he manages to spare the time with all his other commitments!

And Finally
Last, but not least, ENBB would like to wish all readers, supporters and contributors a very merry Christmas and a happy, healthy and prosperous new year. Hopefully 2018 will be another busy year and, as always, we will endeavour to continue with our high standard of reporting into our eighth year!

Roy
Posted by eastnorfolkbus at 16:00