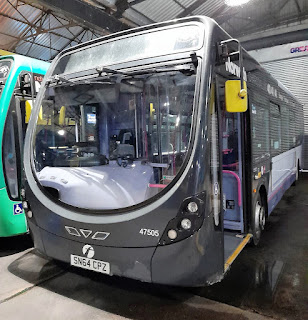 The saloon was 47505 SN64 CPZ which was returning to its old haunts.

The StreetLite was new to First Eastern Counties in November 2014 being allocated to Caister Road depot from the beginning.

Just over two years later it was transferred to Norwich and in early May 2017 it was sent to Simon Morris at Ipswich for the application of its Charcoal livery.

My thanks as always to First Great Yarmouth for the photo and information.

Roy
Posted by eastnorfolkbus at 12:15