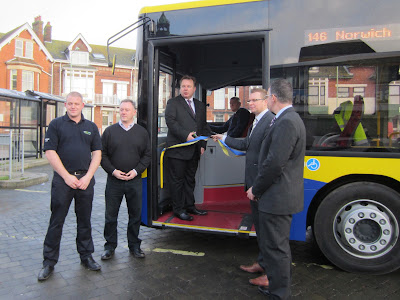 The company has invested £2.6 million in the 13 new vehicles which are expected to be used throughout the Lowestoft, Great Yarmouth and Norwich area

The new buses operate on biogas, a renewable energy source produced from biodegradable waste materials (food waste, crop residue and slurry), through an anaerobic digestion process - a widely used source of renewable energy in mainland Europe, but relatively new in the UK.

So far only six have arrived and they were being used on the 146 route today, the first day of service

I sampled a journey on 604 WX62HHE, the 10:05 departure as far as Beccles; a very quiet and smooth ride with almost a full load.

One thing I did notice, however, was that the rear interior of the bus did look uninviting to passengers as the exterior advertising made it look a little gloomy - especially on a day like today

I overheard one of the passengers say that she had deliberately missed the First X2 service to travel on it!

After taking pictures of three more of them in service at Beccles, I returned to Lowestoft on 606 WX62HFU which was almost empty on departure but picked up more passengers on its journey eastwards

All photos are copyright eastnorfolkbus

The AnglianBus press release on the official launch can be viewed here
Posted by eastnorfolkbus at 19:01