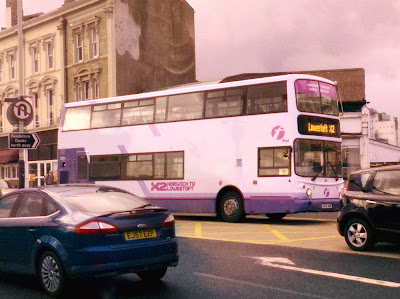 32654 AU05MUW has been specifically branded for the route with Lowestoft, Beccles, Loddon and Lowestoft appearing in the top window screen at the front of the vehicle

The decision to re-brand and repaint vehicles on the X2 route was taken long before the AnglianBus 146 service was registered and, therefore, not as previously speculated on the blog

Neil Chilvers managed to get a quick pic of 32654 on his mobile phone in Lowestoft around yesterday lunchtime - thanks Neil
Posted by eastnorfolkbus at 10:25