A visit to Southwold beckoned today with my main aim of getting a photo of Anglian's new 90 service between Southwold and Halesworth via Beccles.

The 90 started on Monday this week and replaces the former 60S and 60H routes and is also financially supported by Suffolk County Council. As part of the Council's 'on-going efficiency savings' the timetable as been slightly reduced. Apart from an early schools working, there are only three departures from Southwold on Mondays to Fridays.

Since July 2011, in an attempt to ease congestion in the High Street during the summer months, Suffolk County Council and Southwold Town Council agreed to temporarily move the bus stop to outside the King’s Head Public House in a bid to stop large vehicles clogging up the narrow shopping strip. This appears to now be a permanent move with all buses turning by circling the pub via Barnaby Green and York Road

Some journeys do continue to Southwold Pier to terminate including First's 99, BorderBus' 146 and Anglian's 88/X88 services.

Also making an appearance in the early afternoon sunshine was Grebe Coaches of Beccles MIL1417, a Plaxton Cheetah bodied Mercedes. 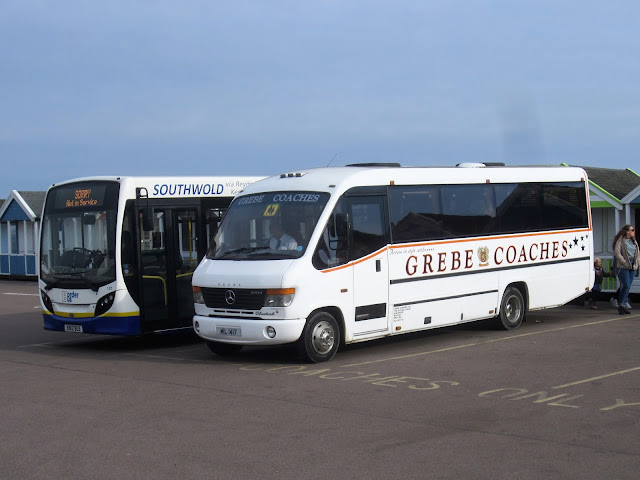 After paying a visit to the Adnams shop, I then consumed my lunch sitting in the sunshine overlooking the sea and pier. What a pleasant visit!

Roy
Posted by eastnorfolkbus at 18:14