Firstly, Volvo B7 Profile 20352 WA05UNE operated the 13.55 Lowestoft to Peterborough and is pictured at Market Gates this afternoon.where it arrived some five minutes late 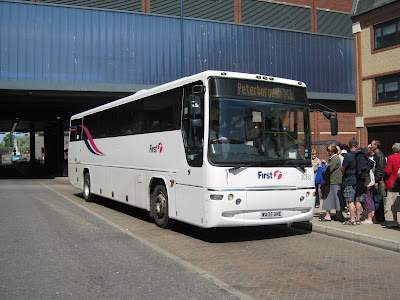 Later in the afternoon Great Yarmouth's Volvo B10M 20126 P766XHS was noted leaving the Market Gates area (outside British Home Stores) on time with the 12.05 Peterborough to Lowestoft
Posted by eastnorfolkbus at 19:11