Anglian was using a StreetLite on its 581 service yesterday on the 16.00 from Great Yarmouth to Beccles. Nothing unusual in that I hear you say, but this time it was white MX60GXC which was captured passing bhs on Regent Road in the town. 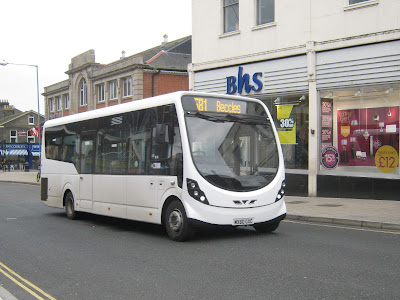 The StreetLite has been given fleet number 327 by Anglian and it is not known whether it's on loan or has been acquired by the Beccles-based company. There is also a picture on Flickr showing it operating in the Worcester area for Astons (Veolia).
Posted by eastnorfolkbus at 10:02