Some observations on this afternoon's/evening's activities which may be of interest to blog readers.


Firstly, with the start of the school contracts in last September, there are now only limited workings through Market Gates Bus Station by Swift Coaches. However, Iveco minibus 76 (YX51JPY) and Volvo B10M 116 (GLZ3141) continue to make regular appearances on services following the end of the school day and today was no exception. 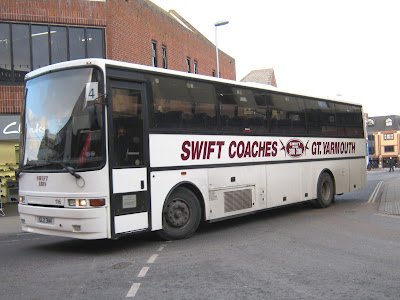 The Volvo (shown above) turns into King Street from Regent Street and runs back empty to Swift's Southtown Road yard following the end of its day's duties. GLZ3141 was previously registered M733KJU and has been named Swift Ibis.
First Eastern Counties were using Dennis Dart 43441 (P441NEX) on the 15.50 service 7 to Belton as seen below. 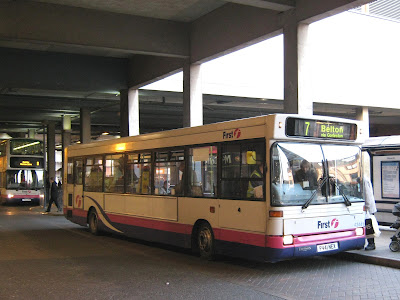 Finally, First Volvo Olympian 34113 (W433CWX) disgraced itself by breaking down on Crab Lane in Gorleston late this afternoon. She was seen being coupled up to a tow truck at 17.30 this evening before heading eastwards.
Posted by eastnorfolkbus at 18:46