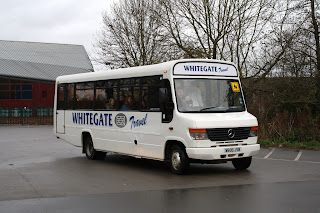 Grahame Bessey reports the arrival of W600JSB at Caister on Sea operator Reynolds Coaches. The vehicle is a Mercedes Benz Vario 0814D with Plaxton Beaver B31F bodywork and is currently in all over white livery.

W600JSB has a a liitle history in that she was originally registered W60CBC when with Coakley of Motherwell in Scotland. Reynolds obtained it from Whitegate Travel of Anderton in Cheshire. Before that it was with Pickford of Chippenham in Wiltshire.

Photo courtesy of Nick Mannion.
Posted by eastnorfolkbus at 09:06