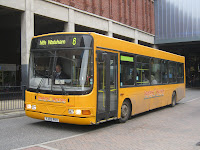 Norfolk bus operator Sanders is to increase all of its fares by a minimum of ten per cent from tomorrow. (Sunday)

The new fares, announced on its website, are due to rising fuel costs and a twenty per cent reduction in bus service operator grant received by the company.

The statement indicated that it was the first increase since November 2010 and that the combined costs to Sanders was 'in excess of £400,000'. Sanders believes it still offers extremely good value for money and that the severe increase in costs leaves them with no alternative if the company is to remain in business.