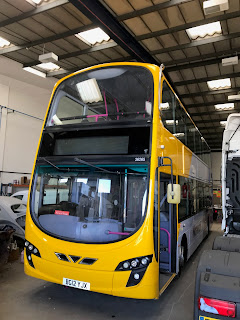 Continuing our Ipswich-based theme, I received an email from Paul Bennett during yesterday afternoon.

The photo was taken by friend Rob Freeman at the Simon Morris premises on Tuesday. Paul says the reason for the delay in sending it was that First had still not seen the new look and given it the ok.

My thanks to Paul for sending the photo and to Rob for taking it.

Roy
Posted by eastnorfolkbus at 10:58