After almost a week out out of circulation (due to illness) I decided to visit Great Yarmouth to see what was on offer buswise. 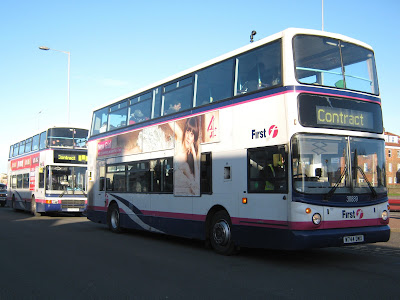 An early afternoon visit to Beach Coach Station yielded nothing, although two First double deckers on Bernard Matthews workings stopped outside on Nelson Road North to pick up passengers. They were Volvo B7TL 30889 (W744DWX) and Volvo Olympian 34186 (S686AAE) as shown above.

Following a stroll along Marine Parade, I made my way back to the town centre. On Nelson Road Central I was passed by Shearings Setra No 206 (BK10EJC) in Grand Tourer colours on its way to Beach Coach Station.

On the bus home, Anglian Dennis Trident ALX400 No. 512 (V161MEV) was passed on Southtown Road heading into town on the 601 service from Southwold.

Another Anglian vehicle was seen in Gorleston High Street; Optare Excel No.400 (X228WRA) was on the 16:06 A47 Gorleston to Norwich. The Excel was a regular performer on this route during the latter part of last week.
Posted by eastnorfolkbus at 18:46