First Pulls Out of Bury 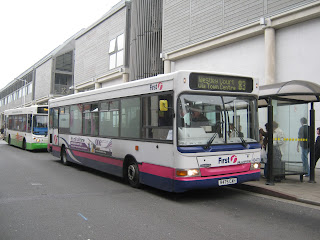 The Ipswich Evening Star reported on Friday that First is to withdraw its bus services in Bury St Edmunds and also close its depot in the town.

First issued a statement saying “Operations at Bury St Edmunds have not been commercially viable for some considerable time, and with continued cost increases facing the industry plus the Government’s decision to reduce the BSOG (Bus Service Operators Grant) by 20% from April 2012, it is with regret that we have decided to withdraw all services at the end of March"

The decision was not unexpected following Stephenson's introduction of new services in the town under the BREEZE banner in October last year. A Bury St Edmunds visit report, prepared later in November, appears here

Speculation is now rife as to where First may pull out of next!
Posted by eastnorfolkbus at 10:56