Former Swift Dennis Dart S511XCR is now in service with new owners Shaws of Maxey. Its Caetano Compass bodywork is now mainly in a white livery complete with a blue skirt. It is pictured at Shaws' premises yesterday. 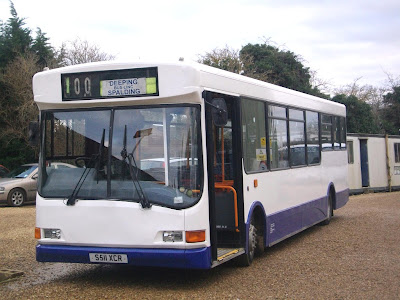 The vehicle was acquired by Great Yarmouth-based Swift from Amza of Blofield who, in turn, purchased it new in January 1999

My thanks to Mark Kirk for the photograph and information

On the subject of seeking out former Swift vehicles disposed of, GHA Coaches of Corwen was reported in the November issue of Buses of acquiring Volvo B10M/Jonckhere M735KJU.
Posted by eastnorfolkbus at 10:34