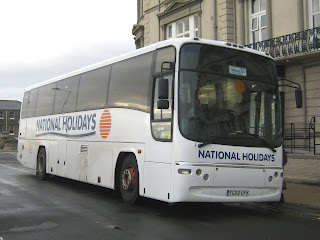 YC02CFK was seen on Marine Parade heading for the Carlton Hotel to pick up passengers at the end of their tour. The photo shows the Volvo B12M outside the hotel awaiting luggage for the homeward journey.


Meanwhile, sister NH05CDH was the sole occupant at Beach Coach Station.
Posted by eastnorfolkbus at 10:46