Following his update to First Eastern Counties operations in the town, Grahame Bessey has informed me of changes at two other Great Yarmouth area operators. 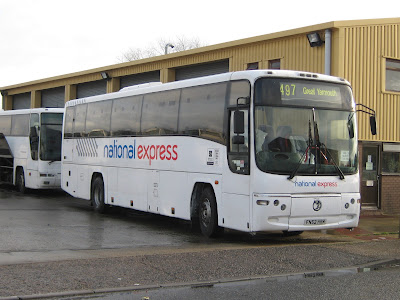 She is pictured here at Ambassador's Gapton Hall premises in December 2008 in her previous guise of FN52HRM and wearing National Express branding.

Reynolds of Caister has acquired another vehicle - this time its a Toyota BB50R with Caetano B22F bodywork. Registered as FJ54MOA, she was new to Browne of Yiewsley which is in the Greater London area.

Thanks once more for the information Grahame.
Posted by eastnorfolkbus at 09:11