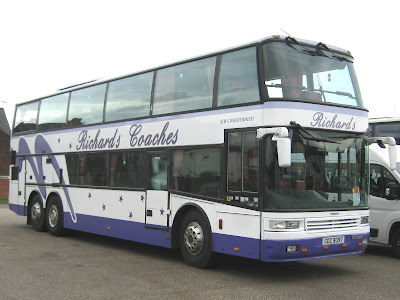 An unusual visitor to Beach Coach Station today was a double deck coach from a Norfolk operator.

It has Berkhof CH57/16CT bodywork and was new to Ferris Coaches of Nantgarw (near Cardiff) in May 1998 as their R157RJH.

Among those also on site were Shearings Volvo B12M 603 (MX04AEC) and Whippet B10M J688LGA. The latter had arrived on Coastal Service A from Cambridge via Newmarket.
Posted by eastnorfolkbus at 18:51