The fourth Scania Omnicity from London's Metrobus operation has been noted on the road in Anglianbus colours. 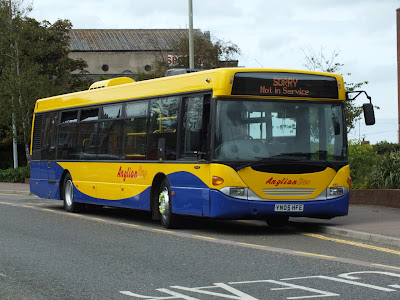 This leaves just YN05HFG to be accounted for and, by a process of elimination, it should receive fleetnumber 446.

So for the record the ex Metrobus vehicles now numbered in the Anglianbus fleet are as follows:-

Again my thanks to Grahame Bessey for the photo.
Posted by eastnorfolkbus at 22:37