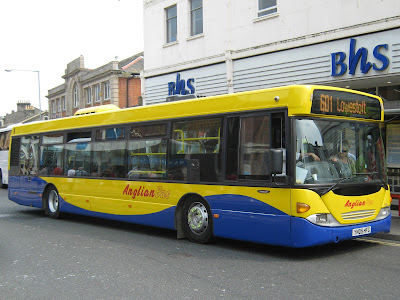 A couple of hours spent in the town centre and holiday areas of Great Yarmouth this afternoon revealed the following activity.

At the BHS stand was a former Metrobus Scania waiting for the 13:50 departure for Kessingland.

Now in Anglianbus colours as their 446, YN05HFG is one of the last received by the Suffolk operator. 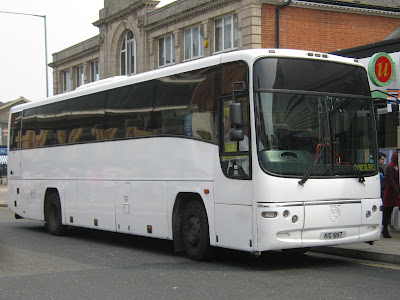 Behind it was Ambassador Travel's Volvo B12M 197 (KIG1857) which was providing some additional luxury for the shoppers on the Asda Free Bus.


KIG1857 was formerly FN52HRM and had previously seen use on National Express work prior to its demotion to general fleet duties. 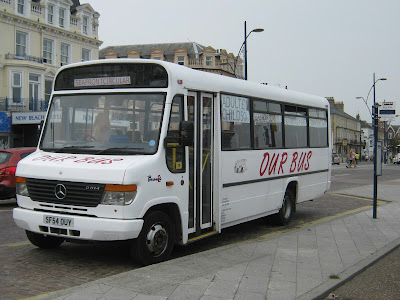 Proceeding to the seafront I was keen to observe the Our Bus Seafront Circular which resumed summer operations earlier in the week.

Whilst waiting I was passed on North Drive by  First's Routemaster RML2480 (JJD480D) heading for the Seashore Holiday Centre.

Soon after, I sighted Our Bus SF54OUY - a Mercedes Benz Vario O814D with Plaxton Beaver bodywork.

It was the regular vehicle operating the service last year and I managed to capture it at the Britannia Pier stop.
Posted by eastnorfolkbus at 18:26