The Norwich bus network is set to be given a big revamp next month, it was announced at yesterday's launch event by Norfolk’s main bus operator First.

The new network, which will be operated by the newly-named First Norwich, has been colour-coded in an effort to ‘simplify’ the city’s network for passengers. 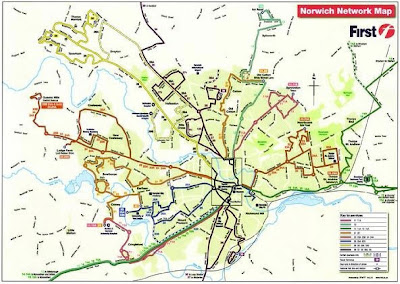 Giles Fearnley, managing director for First UK Bus, said that Norfolk is ‘a very important part’ of the company nationally and said: 'What we have done is make the network more efficient in the way we have linked up each route.'

'Things such as drivers sitting idle waiting for their next trip, that is where we have been able to find some efficiencies by linking up different services.'

Further details of each of the coloured routes can be found here on the Eastern Daily Press website
Posted by eastnorfolkbus at 08:33