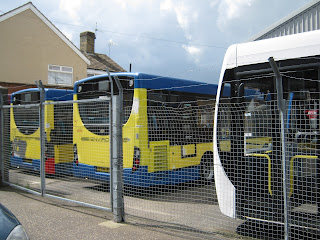 Following the surprise arrival of six ADL Euro 200s at Great Yarmouth's Caister Road, I can at last bring you some pictures of them from earlier today.

All six are languishing in the rear compound at the depot and can be viewed from Harley Road through a wire link fence - not very good for photography purposes! 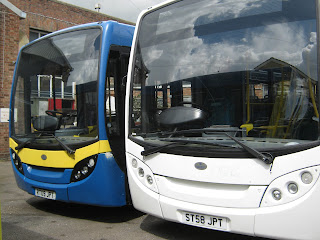 As the registration plates of four of them suggests, they were previously operating with Welsh of Middleton which trades as JP Travel in the Greater Manchester area

Three of them are in JP Travel livery whilst the fourth (ST58JPT) is in allover white.

The remaining two vehicles (DK57SXF and DK57SXG) were new to Lee of Holywell which operates Townlynx services in Flintshire, North -  East Wales 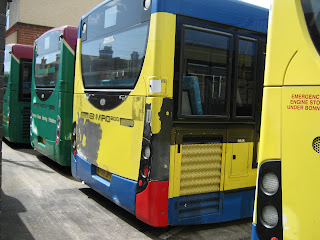 There is a also posting on Youtube regarding the performance of RT09JPT which did not impress the person who uploaded it. The video can be viewed by clicking here.

Finally, as I was taking the pictures a passing First driver confirmed they were all destined for use in Lowestoft.

At least they will be 'different' from what's operating there now!
Posted by eastnorfolkbus at 22:29