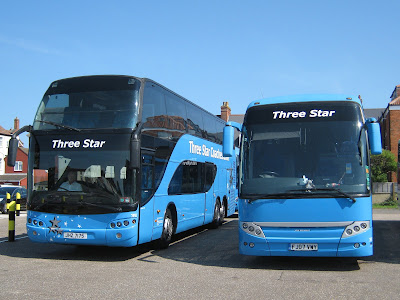 A Saturday afternoon visit to Great Yarmouth's Beach Coach Station revealed no less than three double deck coaches amongst those assembled on a warm sunny afternoon.

Two of them were from Luton based operator Three Star Coaches with both of its Ayats Bravos maintaining a presence.

For the record they had the cherished 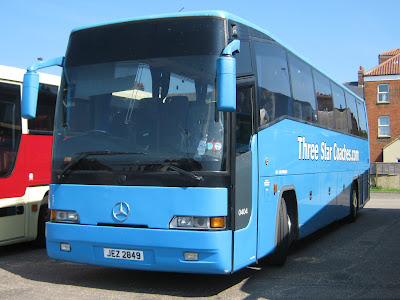 In addition two other coaches from the Bedfordshire operator were there too - representing around a quarter of the fleet! 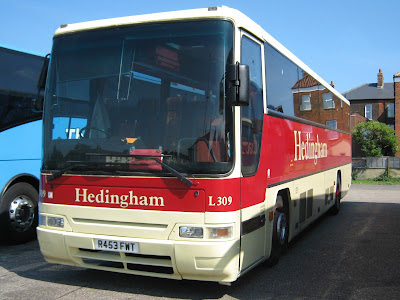 Another noteworthy visitor was a Volvo B10M from Go-Ahead subsidiary Hedingham. 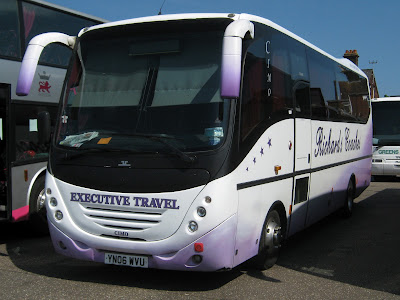 Also there was Theobalds Neoplan YN04AXF

An off chance visit provided an interesting display of a wide range of vehicles
Posted by eastnorfolkbus at 11:36

Add comment
Load more...
Newer Post Older Post Home
Subscribe to: Post Comments (Atom)
WELCOME
Hello and a warm welcome to the East Norfolk Bus Blog from Grahame and Roy and thanks for visiting us.
Now entering its tenth year, the blog concentrates mainly on bus activity within the East Norfolk / East Suffolk coastal strip, centring on the towns of Great Yarmouth and Lowestoft.
There are often reports of frequent visits to other parts of the United Kingdom and also abroad.
Following the recent announcements we are urging all bus enthusiasts to please stay at home. Buses will continue to operate when this is all over and then you will be able to photograph them at your hearts content.
As a result we are temporarily suspending our news feature and will only post the weekly Notices & Proceedings Reports (if published) and possibly some photos from our archives.
We can, however, continue to be contacted by email, twitter, facebook or messenger.
Our email address is
eastnorfolkbus@yahoo.com
Our twitter feed is located at
https://twitter.com/EastNorfolkBus
Our facebook page can be found at
https://facebook.com/east.norfolkbus
PLEASE STAY SAFE BY STAYING HOME!