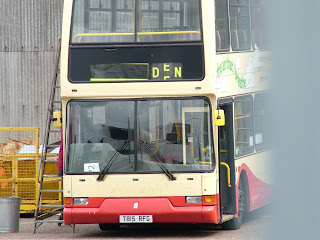 Tim Miller reports that the second of the four former Brighton & Hove Trident has arrived at Car & Commercials yard.

T815RFG is seen at the Beccles site having arrived there around 2.30 yesterday afternoon.

Many thanks to Tim for his reports
Posted by eastnorfolkbus at 09:31