Whilst it's almost a fortnight ago now, I thought I would share some photos with you of my week's stay in Torbay. I was hoping to post this earlier but with the amount of photos taken and a bout of the dreaded lurgy it has been delayed until now.

During almost all of  last week in September we were blessed with warm sunny weather whilst being based in Torquay. The predominant operator (in case you're unaware!) was Stagecoach South West. However, not all their buses were in the usual colours as three routes had special liveries and that doesn't include the presence of Stagecoach Gold which connected the area with Totnes and Plymouth.

The Hop22, between Dawlish Warren and South Devon College was worked by green and white liveried ADL Enviro400 bodied Scania N230UDs from late 2012.

The St Marychurch to Paignton Zoo Hop122 was operated by recently converted ALX400 bodied ADL Trident open toppers in their yellow white and orange colours with each one individually named. 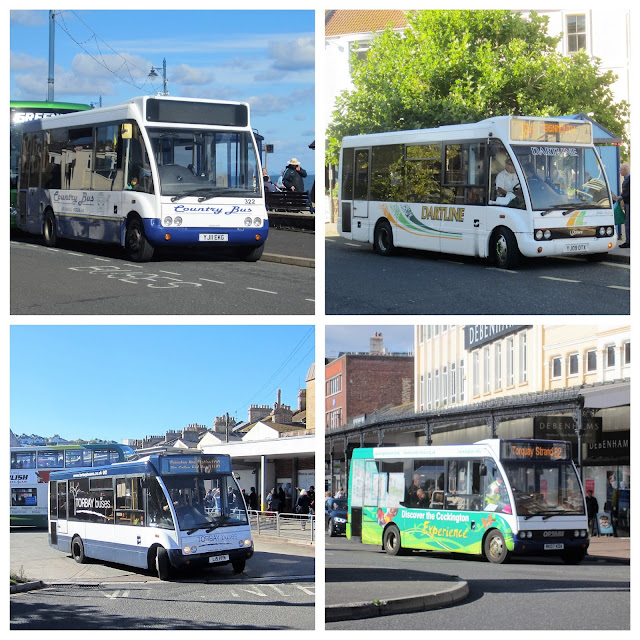 The only independents I observed in the area were Allansway Coaches (trading as Country Bus), Dartline and Torbay Buses - all of which were seen operating Optare Solos! Photos clockwise: Country Bus uses YJ11EKJ at Teignmouth, Dartline YT09OTX also in Teignmouth, Torbay Buses 'Discover the Cockington Experience' branded RK07KOA at the Strand in Torquay and finally Torbay Buses LP15LPN departing Paignton Bus Station

Of the short stay tourers visiting the area, the most interesting appearance was that of a Belle Coaches' Tourismo which was last week employed on rail replacement at Lowestoft Station!

Roy
Posted by eastnorfolkbus at 11:26