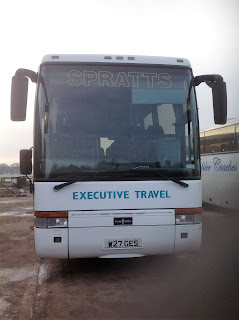 Another arrival to report for Rollesby based Jubilee Coaches is a former Spratt's Of Wreningham coach.

The newcomer is Van Hool bodied Scania L914B W27GES, which was new to the Wreningham operator in April 2000. Arriving last week it has recently been tested on a schools service.

Meanwhile, former Norfolk Coachways A475TBX has been withdrawn (not TIG1295 as previously reported) with its next journey expected to be a one way trip to the scrapyard. The Plaxton Paramount 3200 bodied Volvo B10M-61 was being robbed for spare parts and previously carried the registrations RIG5199 and YDE679.

My thanks to Kevan Portas for the information and photo

Roy
Posted by eastnorfolkbus at 17:07