With the 730 service between Great Yarmouth and Cantley due to end this coming Saturday I thought I would make an effort to record the the penultimate day's working. 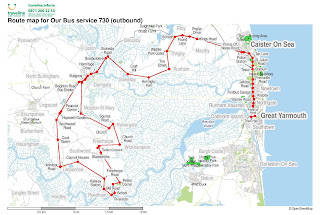 The 730 comprises an outward and return run on Wednesdays and Saturdays only and is operated by Our Bus. Parts of the service only run if the service is pre-booked the day previously.

The outbound version of the route is shown here and was taken from the Traveline website. The final run of the 730 is this coming Saturday

A few minutes later another Our Bus service turned up with route 74 displayed. This is a Wednesday only outward and return service between Little Plumstead and Great Yarmouth Market Gates. It runs via Blofield, Brundall, Strumpshaw, Lingwood, Beighton and Acle.

Also in service with First was Volvo B7 66344 MV02VCX on the 8 between James Paget Hospital and Caister. There is also the possibility that similar 66334 MV02VBZ may also return to service.