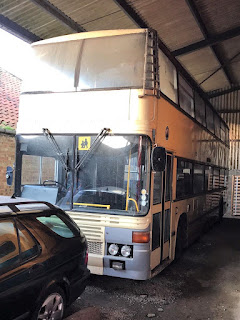 Regular contact Liam S visited a barn on the outskirts of Norwich at the weekend and found these two double deckers under restoration there.

The first was PLZ 2876 an Eastern Coach Works bodied Leyland Olympian coach which was new to Eastern National as D510 PPU and was one of only three full length, low height Olympian coaches built for the UK market.

It has been with a number of local operators including Sanders Coaches, Lodges of High Easter and Flagfinders of Essex where it was re-registered. It subsequently moved to Tony Glew of Colchester before spending its last years with Venturer Coachways of Brightwell. Following that operator's demise it was privately aquired and preserved spending some time at the Our Bus premises at South Burlingham. 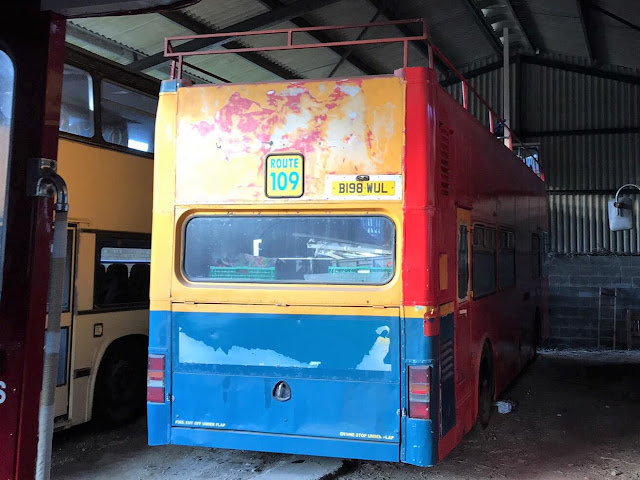 The other vehicle was B198 WUL is a MCW Metrobus Mk I with open-top MCW bodywork. It was new to London Transport in March 1985 as a conventional closed top bus with fleet number M1198. It passed to Metroline on privatisation and withdrawal came in July 2003 and was acquired by Ensign Bus of Purfleet a month later. The same month it was purchased by Scenic Shoreline Suncruiser of Scarborough to operate an open top seafront service in the town

My thanks to Liam S for the photos

Roy
Posted by eastnorfolkbus at 12:44

Newer Post Older Post Home
Subscribe to: Post Comments (Atom)
WELCOME
Hello and a warm welcome to the East Norfolk Bus Blog from Grahame and Roy and thanks for visiting us.
Now entering its tenth year, the blog concentrates mainly on bus activity within the East Norfolk / East Suffolk coastal strip, centring on the towns of Great Yarmouth and Lowestoft.
There are often reports of frequent visits to other parts of the United Kingdom and also abroad.
Following the recent announcements we are urging all bus enthusiasts to please stay at home. Buses will continue to operate when this is all over and then you will be able to photograph them at your hearts content.
As a result we are temporarily suspending our news feature and will only post the weekly Notices & Proceedings Reports (if published) and possibly some photos from our archives.
We can, however, continue to be contacted by email, twitter, facebook or messenger.
Our email address is
eastnorfolkbus@yahoo.com
Our twitter feed is located at
https://twitter.com/EastNorfolkBus
Our facebook page can be found at
https://facebook.com/east.norfolkbus
PLEASE STAY SAFE BY STAYING HOME!