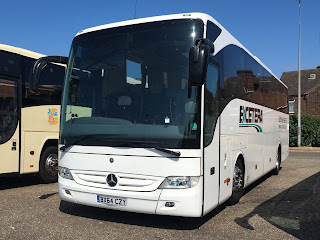 As to be expected, coaches working for the National Holidays and Alfa Travel operations were on site. The former was represented by Setras NH10MSH and NH11STH whilst Commercial Coaches' Volvo B12B PO59FHY was operating on behalf of the latter.

However, surprising was the appearance of Coaches Excetera's Mercedes Benz Tourismo BX64CZY.

In connection with the local Wheels Festival, the 'Spratts of Wreningham' Bedford SB3 WLO685 was employed on the seafront to Lawn Avenue circular. Further details and photos of the coach can be viewed on the 'Bedford in Town' feature published in September 2016

Roy
Posted by eastnorfolkbus at 21:58