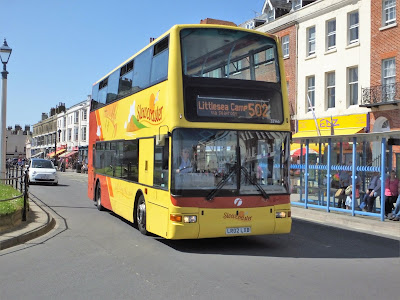 I regularly read your blog linking through from Plymothian Transit and was interested in seeing your picture on Thursday of 33156 in Weymouth. As Traveline Data Coordinator for Dorset, Weymouth is a big part of my patch, and I can add more information to your post.

Slowcoaster only ran for one season, in 2017, and was unsuccessful because it was as the name implies a very slow way to traverse the Dorset coast. It ran in and out of a number of holiday camps en route and never generated the business hoped for.

At least two buses received the livery, the other also being second hand 33146 LR02LXB and for the 2018 season they are usually in service on the 502 to Littlesea Holiday Park, or the 4 to Preston which needs double deck buses in summer as it passes Weymouth Bay Holiday Park. At the end of the summer they are likely to lose all the lettering but retain the yellow and brown base colours as these are also used for the Jurassic Coast liveried buses.

I don't know if 33146 was also in Norwich at some point (It was!) but I am attaching a photo I took of it on 5 May 2018 working the 502 to Littlesea. It's not the best shot but it managed to capture the destination which is not always the case.

Many thanks Ken for contacting the blog with the additional information and photo. Ken's Fickr site can be found at. https://www.flickr.com/photos/ucx275/

Roy
Posted by eastnorfolkbus at 15:12