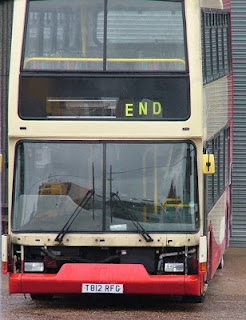 T812RFG was an East Lancs Lolyne bodied Dennis Trident which was new to Brighton & Hove in May 1999. It was received by Anglianbus in 2012 still in Brighton colours as Tim Miller's photo shows but subsequently repainted at Beccles based Car & Commercials in August that year.

Its last stint with Anglianbus was in 2016 when it moved to Beccles during February that year. It was withdrawn in August of the same year, only to return to service in October following the transfer of the gas buses to Plymouth Citybus.

A month later T812RFG was transferred to another Go Ahead subsidiary, Hedingham & District who operated it primarily from their Clacton depot. Robert Appleton sent a photo of it operating in Essex, still in Anglian livery, in July this year - see Ex Anglian Deckers in Exile - 21st July 2018.

However, Ross Newman's monthly Ensign Happenings report states that both T812RFG and similar ex Konectbus W824NNJ had arrived at Ensign from Hedingham during November. They didn't stay very long before being disposed of to MC Tractors of Ramsey, Huntingdon for scrap later in the month.

Roy
Posted by eastnorfolkbus at 11:57