After the first lockdown I decided to redecorate our third 'bedroom' plus all the work that entailed. The room is really where all the books/magazines etc are stored and where the PC is based for compiling the blog. The work has not been without its surprises however. The main one was the total collapse of a shelving unit almost burying me under it! 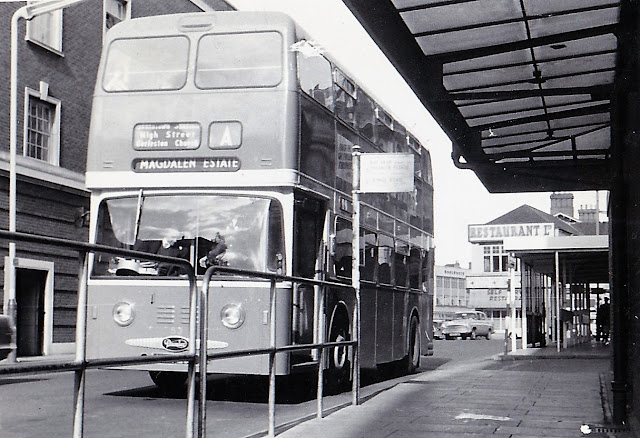 Removal of  the same and the sorting of the old publications within it has also yielded a few surprises including this photo falling out of an old Buses magazine. It was taken by me with an old Brownie camera and the scene is local history at its best.

The bus is a Roe H43/33F bodied Daimler 'Fleetline' CRG6LX parked beside the shelter adjoining the then ABC Regal Cinema/Theatre. New in June 1963, No 53 HEX253 awaits passengers for its A service to Magdalen Estate - all buses to Gorleston had destination letters then. I believe it was taken on a Sunday in the mid/late 1960's as work had yet to start on the demolition of the old Nichols Restaurant to make way for the Market Gates Shopping Centre.

HEX253 was withdrawn in 1978 and was disposed of to dealer Martin of Middlewitch presumably for scrap.