A few bits and pieces of news to report today on the Great Yarmouth bus scene.

Appropriately, first the departure of First Essex Olympian 34311 (L311PWR) to Chelmsford proceeded as planned this morning. What's more Syd Eade was on hand to photograph it outside Caister Road depot prior to its journey to Essex. She had a neat printed sticker on the front windscreen saying 1a LOWESTOFT 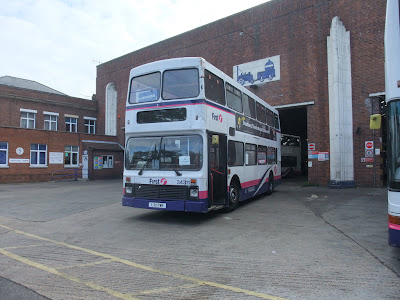 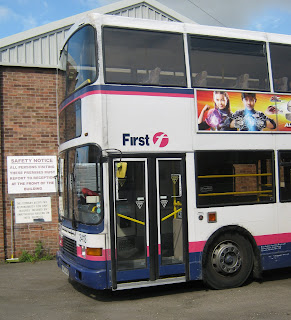 Meanwhile, at the rear of the depot this morning were three other Olympians. These were former Yorkshire Coastline vehicles which subsequently joined the First Eastern Counties fleet during 2009. They were 34108/12/3 (W435/2/3CWX) and are located where the withdrawn vehicles are normally kept. Their future appears bleak. 34113 is shown left at the rear of Caister Road depot this morning.
Beach Coach Station
Eleven vehicles at Beach Coach Station this afternoon including Fowler's Travel Volvo B12M VDO929 seen here 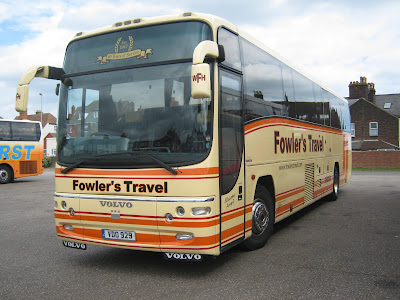 Swift Taxis
Swift's 500 Seafront Service was noted in operation today with the usual Mercedes Vario AE07NZC parked at the Britannia Pier bus stop.
A visit to Copyfax Yard at Gapton Hall Industrial Estate saw only seven of the original line up of nine vehicles available for the recent auction. However, the two vehicles (Dart S511XCR and Volvo M734KJU) were later located at the nearby headquarters on Morton Peto Road.
At the front of the Morton Peto Road site was TransBus Dart 137 FJ53VDL bearing the name Swift Lark 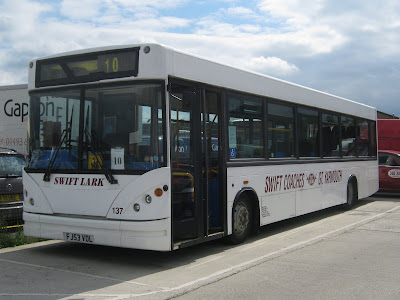 Finally,I would like to express my thanks to Syd Eade for the report and picture of  First Essex Olympian 34311
Posted by eastnorfolkbus at 19:26