Another glorious indian summer's day and an afternoon's visit to another Suffolk market town. This time the spotlight falls on Beccles, just over the Norfolk border.

The main reason for the visit was to hunt down Nightingales Leyland Olympian F633LMJ. Having noted earlier in the day on east-anglia-buses yahoo group that it is normally parked close to the Sir John Leman School, I set about finding it. Not long after locating the school, the ex-Barfordian vehicle drove on to the forecourt behind an Anglian Scania to await its passengers.
﻿
﻿


With mission accomplished, I backtracked to the centre of the town and parked up in a one hour parking space. A short walk to the bus station saw me arrive at 3pm exactly with little happening; other than Anglian's Volvo Olympian 507 (HIL7618) awaiting its next duty

It was another 15 minutes before anything else arrived and then all hell broke lose! Firstly, StreetLite 323 (MX60BWK) arrived to work the 581 to Great Yarmouth. Pulling up behind it was First Eastern Counties 32208 (LT52WTO) working the X2 from Norwich to Lowestoft. Moments later Anglian Solo 300 (YT51EBF) arrived in the next bay to work the 522 service to Halesworth 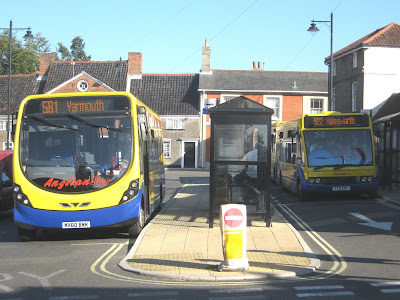 Some five minutes later, another StreetLite arrived from Great Yarmouth to work the 580 to Diss. The vehicle was 325 (MX60GXA), which gave me the opportunity of photographing the two of them together. 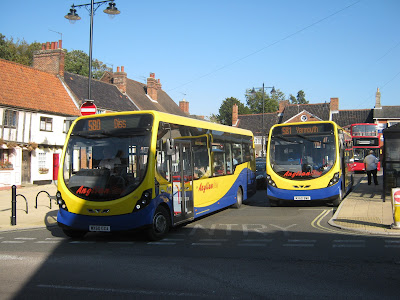 However, there was more to come. One of the three 'new' Anglian Tridents (X309NNO) arrived in the bay behind MX60BWK. Still retaining its London Red livery, it was working schools service BR001. 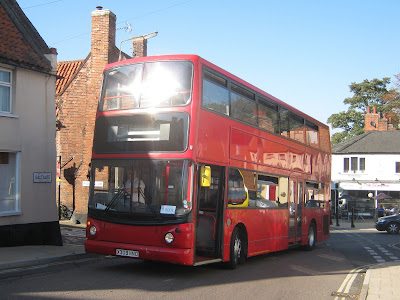 All in all very interesting and busy 50 minutes or so in this small Suffolk town.
Posted by eastnorfolkbus at 19:21