As from Friday 22nd July 2022 a new Daily, Summer only, Town to Beach bus service commenced operation at Wells-next-the-Sea. It replaces the Wells Harbour Railway which, having opened in July 1976 closed in September 2021 despite much opposition, both local and national. 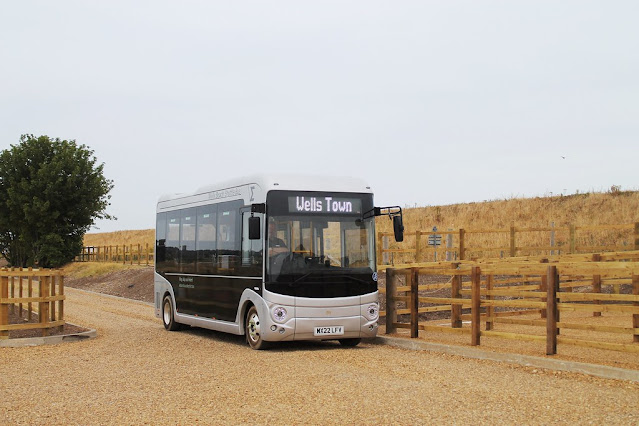 Operated by the Holkham Estate, primarily using a Mellor Sigma 7 electric vehicle, the new service runs along Beach Road and as this road is privately owned, no local bus registration is required. This is not the first service to run over this route as local operators, including S A Abel and Dunthorne Coaches of Wells, had at various times provided services between Wells Railway Station on Polka Road and The Beach via The Quay prior to the opening of the WHR. During busy periods, open top 1951 Leyland Tiger PS1 type 840 XUJ will provide additional capacity. Both vehicles are garaged in Wells overnight.

On the slightly damp morning of Saturday 30th July, Mellor Sigma 7 electric bus MX22 LFV is captured at the Wells Town terminus situated adjacent to Wells Town FC ground, having just arrived in from The Beach. Note the new road leading up to Beach Road, the turning area and other passenger control paraphernalia that has recently been constructed. As mentioned above the route runs along the privately owned Beach Road which is beyond the fence, but below the bank in the background.
Posted by eastnorfolkbus at 17:09