A call into Great Yarmouth's Beach Coach Station at around 2.15 yesterday afternoon coincided with some busy activity. 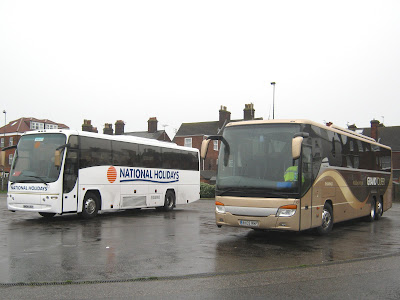 At the coach station there were only two vehicles on view; National Holidays B12M 658 (NH04JCH) and Shearings Grand Tourer Setra 109 (BK09RNF)

As I was photographing the twosome, a convoy of buses on contract workings headed towards the pick up point outside the coach station. At the front of the queue was Chenery's Setra 2508EL followed by three First Eastern Counties Olympian double deckers. The trio was headed by 34110 (W437CWX) followed by 34333 (H132FLX) and 34112 (W432CWX). Photos of 34110 and 34333 can be seen here on the 'Contract Work' posting of the 22nd November
Posted by eastnorfolkbus at 10:01