First Eastern Counties operates its 6B service between Market Gates Bus Station and Belton via Bradwell and Mallard Way on Mondays to Fridays during school and college days. It comprises an 08:00 Belton to Great Yarmouth and a 15:20 return from Market Gates. 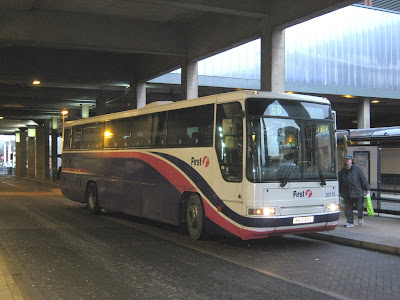 Surprisingly, as schools have finished for the holiday period,  it was operating again yesterday afternoon despite the timetable indicating that it wasn't! Instead of the usual double decker, the handful of passengers were treated to the delights of  a Volvo B10M. Above First's 20115 (N615APU) is photographed prior to its departure from Market Gates.
Posted by eastnorfolkbus at 09:41