Early this afternoon I observed two Chenery coaches in Great Yarmouth with the first being Setra BNG444Y. It was completely devoid of any fleetnames and could only be identified through its legal lettering. It looked as if had recently undergone a repaint. 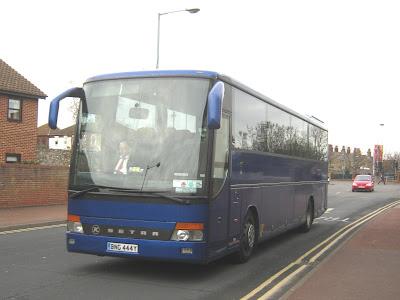 Arriving at Beach Coach Station at around 14:10, I was greeted by a convoy of four vehicles heading south along Nelson Road North. At the front of the procession was another of Chenery's Setras; this was 2508EL on a workers' contract. 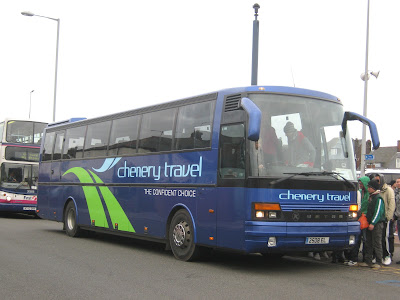 Following immediately behind were three First Eastern Counties buses - Volvo B7TL 30888 (W743DWX), recently reprieved Olympian H132FLX and 34112 (W432CWX). A couple of minutes later a fourth First double decker arrived in the form of 34110 (W437CWX). All four picked up workers at the coach station destined for Bernard Matthews.
Posted by eastnorfolkbus at 19:12