This week's Throw Back Thursday concentrates on a Great Yarmouth Transport Leyland Atlantean. However, one immediately thinks of the double deckers of that ilk but this is one of the three single deck versions new in March 1968 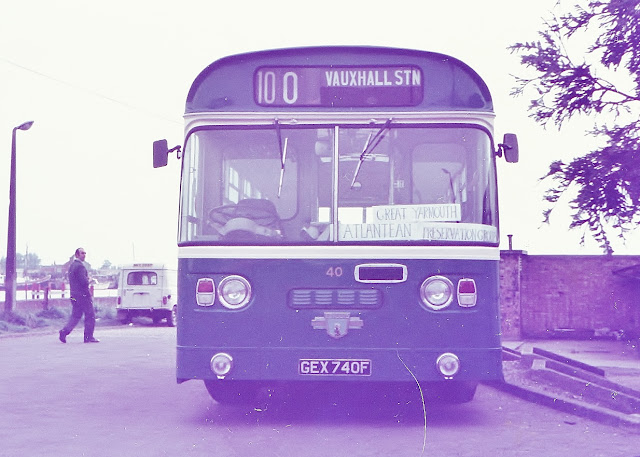 The then municipally owned Great Yarmouth Transport purchased the batch of three unusual Leyland Atlanteans, with bodywork by Marshall of Cambridge. They were unusual in that their double deck chassis was purposely built as a single decker

The batch were numbered 40 through to and including 42, with matching registrations GEX740F, GEX741F and GEX742F. They were withdrawn at some point during the 1980s following newer replacements

The above photo shows No 40 at the rear of the town's railway station on 1st June 1983 and the route number 100 signifies the centenary of the Great Yarmouth - Acle - Lingwood line. The accompanying photo shows the evening special being prepared for departure complete with SLOA Pullman stock

At the time of the first photo, it was owned by the Great Yarmouth Atlantean Preservation Group. It was subsequently sold and stored in North Yorkshire for a while. Later No.40 spent some time in Hertfordshire prior to it being acquired by a private owner and is now based locally.