So during yesterday afternoon I had a wander along the diversion route to get the odd photo or two of buses working away from their usual haunts - plus I got some surprises as a bonus! 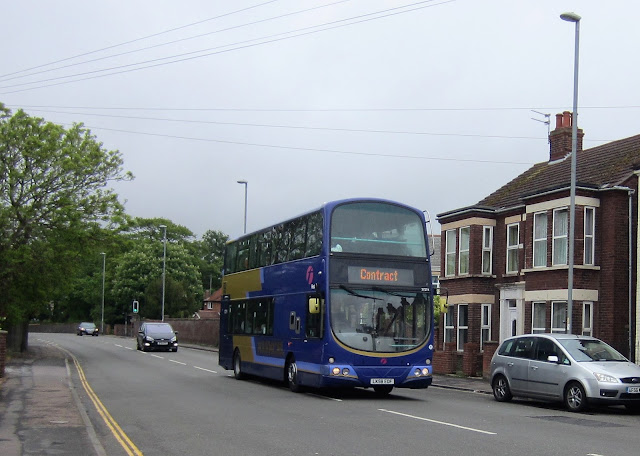 A couple of Belle Coaches were seen on school duties prior to me being taken unaware by the passing of Volvo driver trainer 20122 P732NVG - I was not quick enough to get a photo!

Another couple of surprises lay in store when I arrived on Beccles Road. Whilst I was quick enough to get a photo of Anglianbus East Lancs Lolyne bodied Trident T812RFG on the 61 to Market Gates, I missed a photo opportunity of on loan First Norwich Gemini 36180 BD11CDZ on the 7 travelling in the opposite direction. You can't win them all can you!

However, Grahame Bessey came to the rescue as he had captured the Gemini leaving Market Gates earlier on the 7. Thanks for the pic Grahame

The diversions are scheduled to end tomorrow evening

Roy
Posted by eastnorfolkbus at 08:11