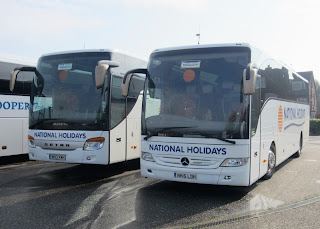 A roll call at Beach Coach Station revealed seven vehicles present including three from the Shearings Group. They were Shearings Holidays' Setra 324 BK11CRF and National Holidays' Setra NH13KWH and Mercedes Benz Tourismo NH15LDH. Another Tourismo from the Alfa Travel fleet in the form of BU13ZTX was also parked up 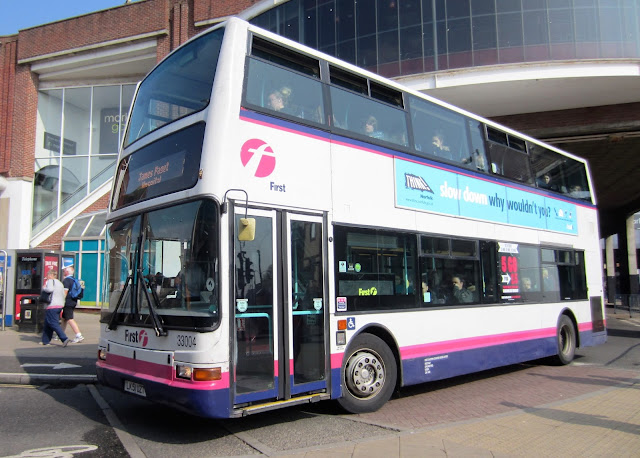 You will probably have seen that three First Norwich Dennis Tridents have transferred to Caister Road. So far photos of 33007 LK51UZE and 33151 LR02LXK have already featured on the blog and I was fortunate it obtaining a picture of the third, 33004 LK51UZT, leaving Market Gates earlier on the 8 for the James Paget Hospital. Its Norwich branding has been removed and has yet to recieve the First Great Yarmouth treatment!

Two of the Volvo B12M's also passed through Market Gates this morning. 20514 WV02EUP  on a contract duty plus 20500 AO02RBX, which arrived from Norwich only yesterday morning, on the 7 to Belton

Roy
Posted by eastnorfolkbus at 12:18