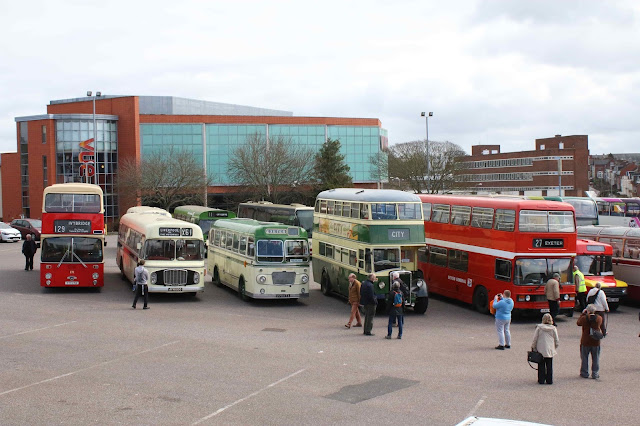 Saturday 19th March was the Exeter Spring Running Day organised by the Devon General Omnibus Trust (DGOT) in association with Stagecoach South West. It was a memorium to the late Philip Platt founder of the Devon General Society in 1982 and secretary of the DGOT who passed away in December 2016. Phil had campaigned hard to organise an event to commemorate the closure of the two level Exeter bus station originally opened in July 1964. Many readers of a certain age will have memories of this site either passing through on route to west Devon and Cornwall or visiting for the variety of buses and coaches it could yield.
A planning hold-up with contract award means the bus station will remain open for a while yet. Around 24 preserved buses attended with many giving rides on the 12 routes running from 10:00am to 4:00pm with 73 departures! A well organised event with not only full sized service buses but coaches and those infamous Harry Blundred bread vans (left) running on the ‘Mini’ route down to the Quay.

If you like AEC’s and Leylands, PD’s, Panther and Atlanteans then the preserved Devon
General and City of Exeter buses delighted with their distinctive sounds recalling sunny holidays in the south west. Bristol was represented by a WNOC FLF (a handsome beast) 1969 468FTT; DG LH6L 108 KTT38P in National Green; WN 3307 AFJ727T LH / Plaxton Supreme coach of 7’ 6” wide; WNOC SUL4A 420 270KTA and Crosville RELH6G CRG103 AFM103G.

Newer vehicles, in preservation, included Stagecoach Devon 701 P701BTA a Volvo B6 in ex-works condition and a work in progress First WN Volvo B6 Wt Crusader 48264 W604PAF. Stagecoach South West showed a line-up of their current ‘decker fleet including RML2451. All 6 buses were in a different livery.


A 24 page commemorative programme was available, illustrated with many pictures in colour.

My thanks to Martyn for his report and accompanying photos

Roy
Posted by eastnorfolkbus at 12:19